Dont copy this bot except with my permission.

Dont say the bot is yours.

Dont hack to remove me and legit from admins in bot.

Dont advertize in my worlds.

I told some days ago that i was gonna make R42Bot's EE version...
Well, here it is!

No more updates. Thanks for feedback people, but i won't update R42Bot anymore...
Try out my newest bot R42Bot++ wich im updating!

Well, yes. I made a memory back to life!
I fixed some bugs anyway.

I'll stop developing this old project because i have made a new brand new fresh bot R42Bot++...
Dont worry, R42Bot lovers, ill make a EE version of this bot for you, i will announce when i release it.

Sorry guys, i have friends too, i had to play with them c:

Anyway, 3 days past, that is considered a delay for me, but, no, it wasnt a delay.
Im not with delays, dont worry guys xD


Bot now works for other ppl's worlds, cause there is code box added 3:
Also, for best results tell world owner to addadmin the bot.
/addadmin .yourname.


And, alot of new features we're added.
NO ERRORS FOR SURE NOW.

And, you might like the basic snake delay. Puts right delay for each situation you want.
That's not all, see more in the bot.

Some text problems have been fixed, digbot now has full ores diggable.

a update is alaways good (sometimes)

- added commands, !sndelay, !isdiscoenabled, !issnakeenabled
-DigBot [NEW]
-No Errors
-Snake Delay
-Clear Chat Button
and more you can see while in the bot...

What's new?
It's a suprise. 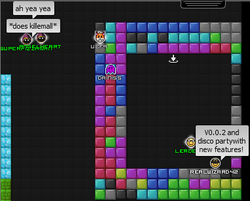